By: Sebastiano Mandalà
In: Other
With: 0 Comments

knowing how short my memory is, I saved all my professional life memories in a folder on my HD. Some of those memories are meaningful only to me, but why not sharing my first, completed game (yeahh it was 1997…I think) ?

The version I am linking is actually the second version of the really original one. Both are a remix of Puyo Puyo, game that I loved to play when I used to play with the arcade games in my city, Palermo.

This game had another very important feature, was not implementing any scrolling, a technique that I did not know how to implement at that time :).

The game presented some new features (like special bubbles, when played in special mode) and a nice AI. The language used, Pascal, was the language that I was learning at the high school. Turbo Pascal was the compiler and the source code was also featuring a lot of 16 bit inline assembly 🙂 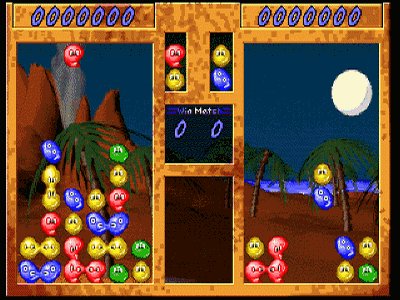 Link to the game: https://docs.google.com/open?id=0B3zwSfMivwvBNmNxYVJGcmwtR0k

powered by dosbox and I can say..it is still fun 🙂

Edit: Unluckily it seems like dosbox does not support very well all the powerful code behind this game and it crashes while playing the second level. If you know other good DOS emulators, please let me know.